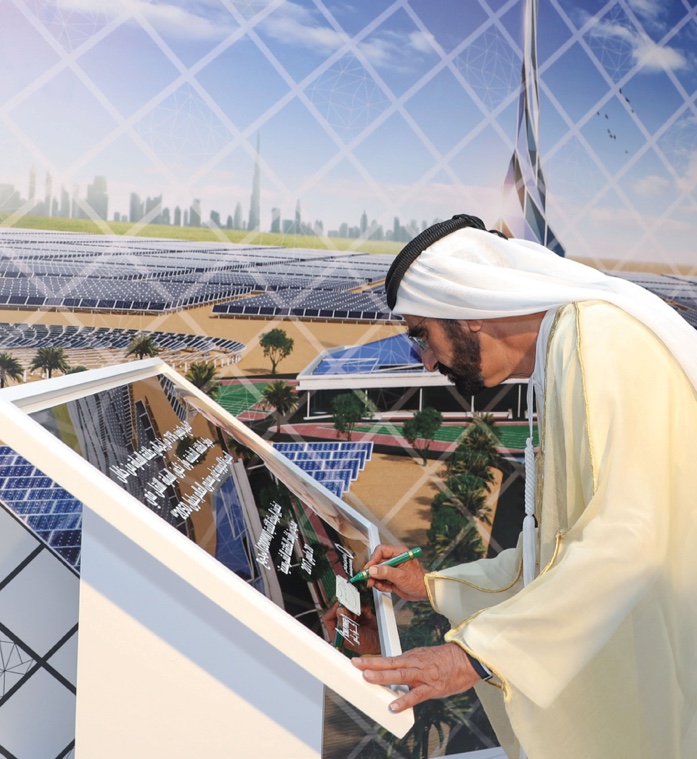 The Mohammed bin Rashid Al Maktoum Solar Park is the largest single-site solar park in the world based on the Independent Power Producer (IPP) model. It has a planned production capacity of 5,000 MW by 2030, with investments totalling AED 50 billion. When completed, it will save over 6.5 million tons of carbon emissions annually.

The Mohammed bin Rashid Al Maktoum Solar Park contributed to DEWA winning the Best Sustainable Project of the Year in the UAE at the 2014 MEED Quality Awards. This is the first time this award was given to a renewable energy project in the Middle East and North Africa. 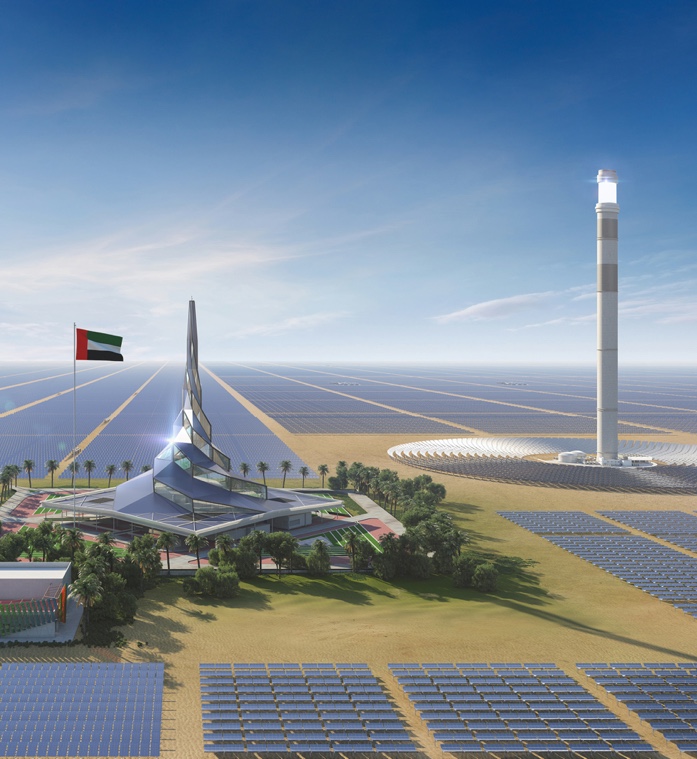 DEWA is anticipating and shaping the future of energy using innovative disruptive technologies in the production, transmission, and distribution of electricity and water. This will transform Dubai into a global centre for clean energy and green economy.

The Dubai Clean Energy Strategy 2050 and the Dubai Net Zero Emissions Strategy 2050 aim to provide 100% of the energy production capacity from clean energy sources by 2050.To achieve this, DEWA is developing the Mohammed bin Rashid Al Maktoum Solar Park in phases, to eventually generate 5,000MW from photovoltaic and Concentrated Solar Power (CSP) technologies.

A History of the Solar Park 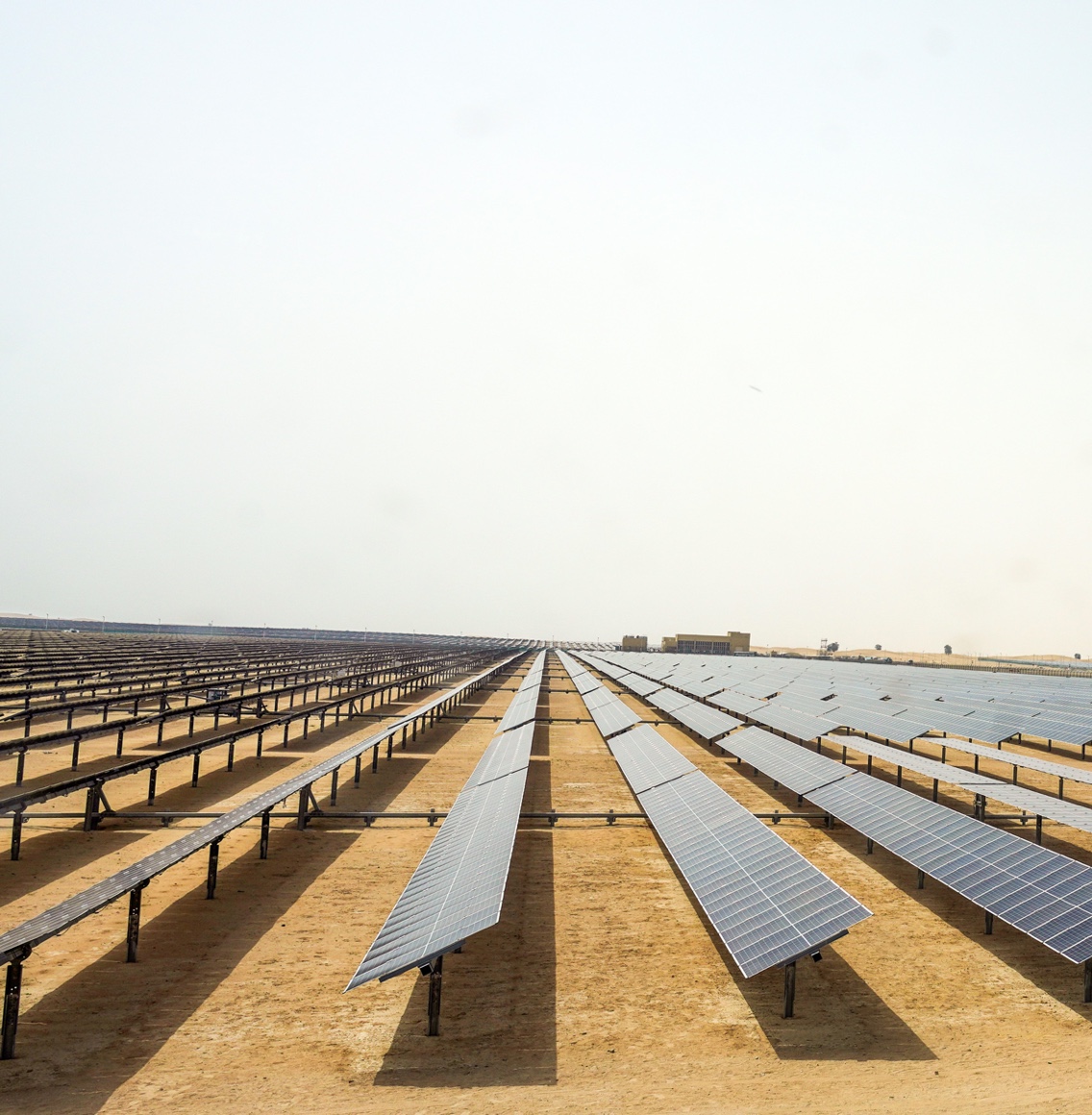 The 13MW first phase became operational on 22 October 2013, and the project contributed to a major reduction of carbon emissions in adherence with the Clean Development Mechanism. The implementation of the first phase was an important step in achieving Dubai’s objectives to diversify its energy mix. The first phase is built up of about 153,000 photovoltaic cells, connected to 13 transformers in inverter buildings. The output is transformed to 33 kilovolts (kV), and generates 28 million kWh of electricity annually. The first phase contributes to an annual reduction of about 15,000 tons of carbon emissions. The surface area of the project covers 280,000 square metres. 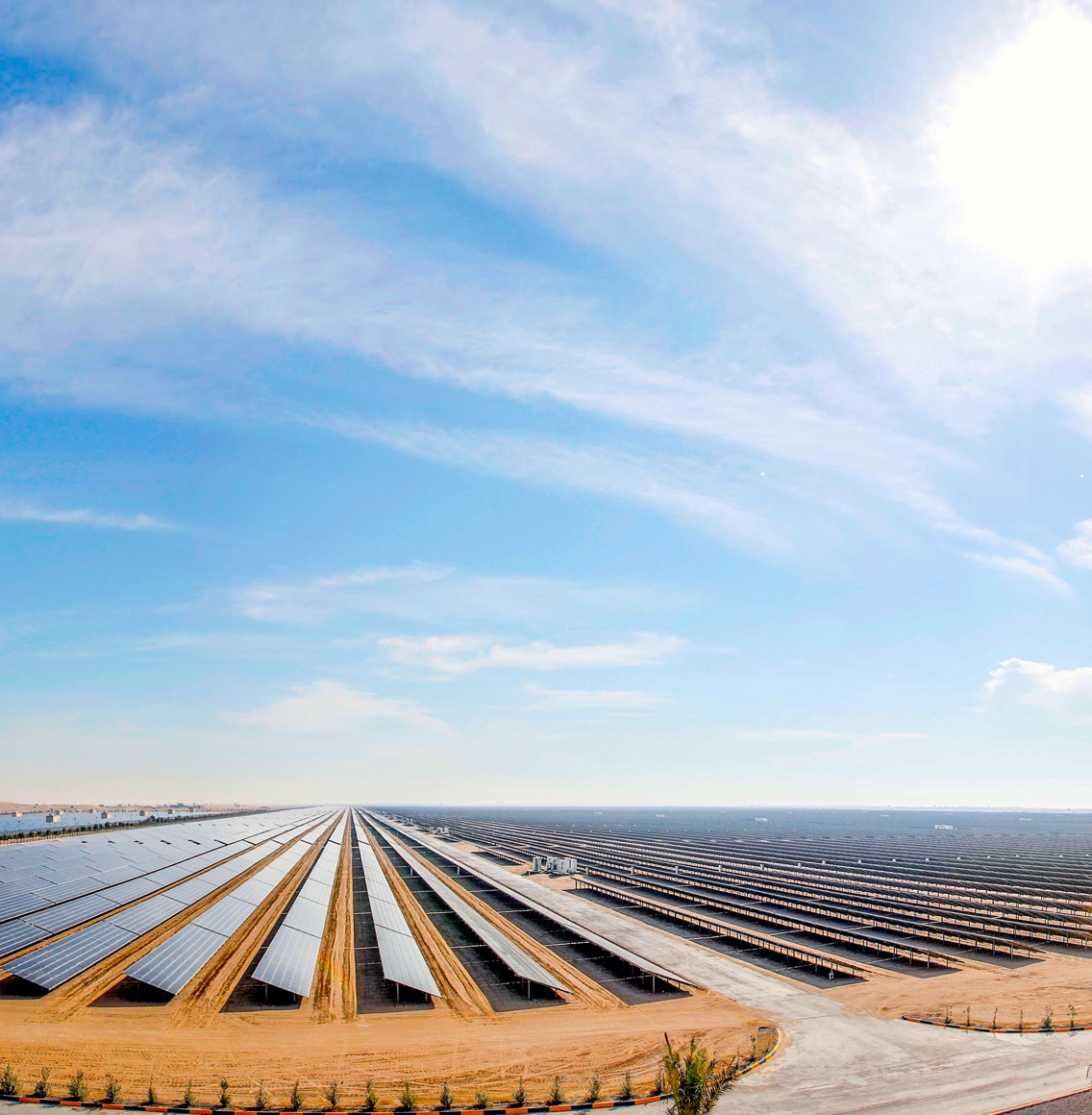 On 20 March 2017, H.H. Sheikh Mohammed bin Rashid Al Maktoum, Vice President and Prime Minister of the UAE and Ruler of Dubai, inaugurated the 200MW second phase of the solar park. It is the largest and first project of its kind in the region’s solar power sector, and adopts the IPP model. A consortium led by ACWA Power from Saudi Arabia, and TSK from Spain, built the project with an investment of AED 1.2 billion. The project provides clean energy to 50,000 residences in the Emirate, reducing 214,000 tonnes of carbon emissions a year. This phase installed 2.3 million photovoltaic solar panels over an area of 4.5 square kilometres. The work by Shuaa Energy 1, which was established by DEWA and the consortium led by ACWA Power and TSK, has been vital in completing the work efficiently and professionally, with 1.5 million Safe Man Hours without Lost Time Injury. 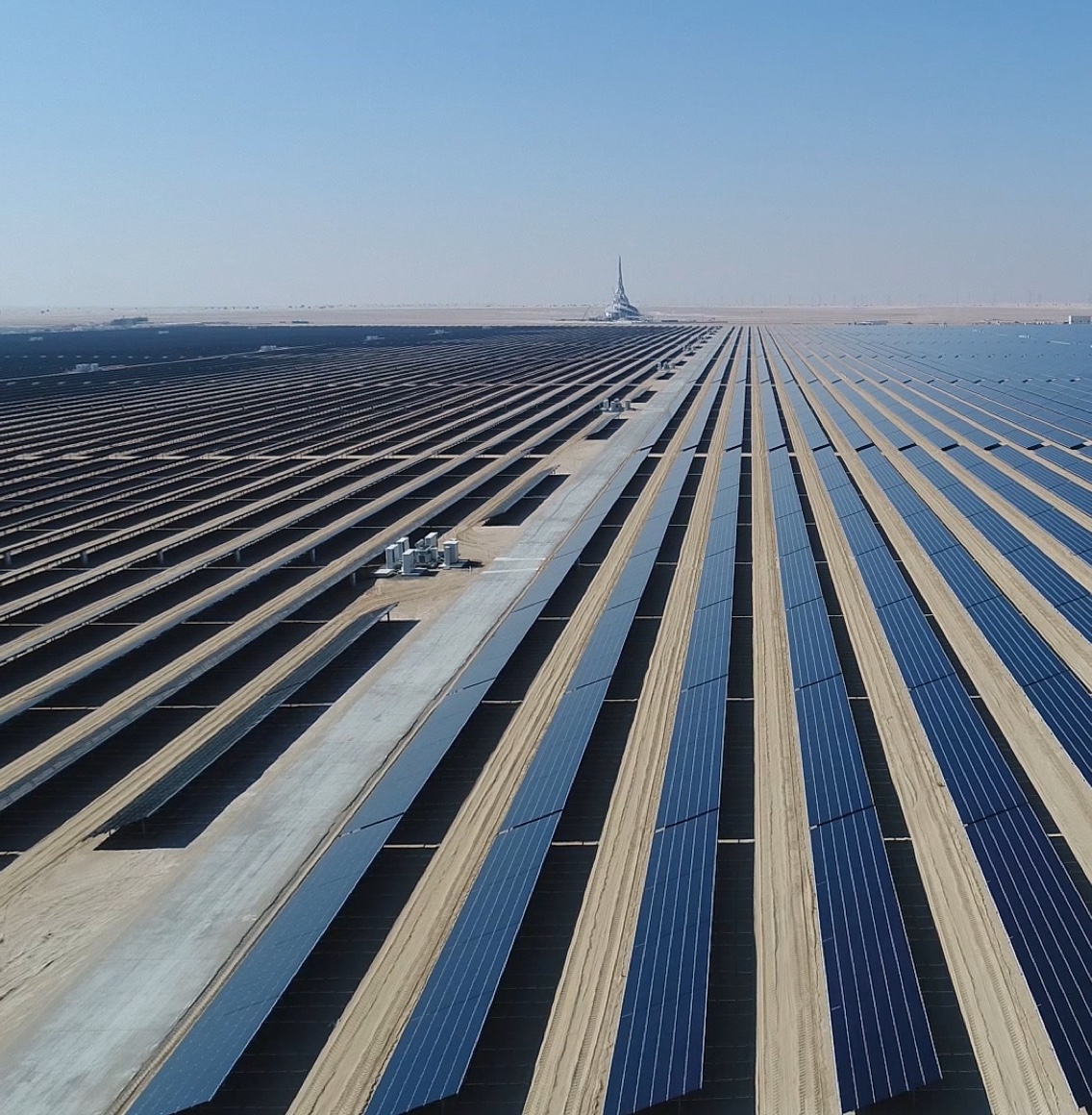 In June 2016, DEWA announced that the consortium led by Abu Dhabi Future Energy Company (Masdar) and EDF Group, through its subsidiary, EDF Énergies Nouvelles, was selected to build the 800MW photovoltaic 3rd phase of the solar park. DEWA recorded a world record of USD 2.99 cents per kW/h for the IPP bid. This solar plant is the first of its kind in the Middle East and Africa region, with an advanced solar tracking system to increase generation by 20-30% compared to fixed installations. The 200MW first stage of the third phase became operational on 1 May 2018. The second and third stages became operational in 2019 and 2020 respectively. 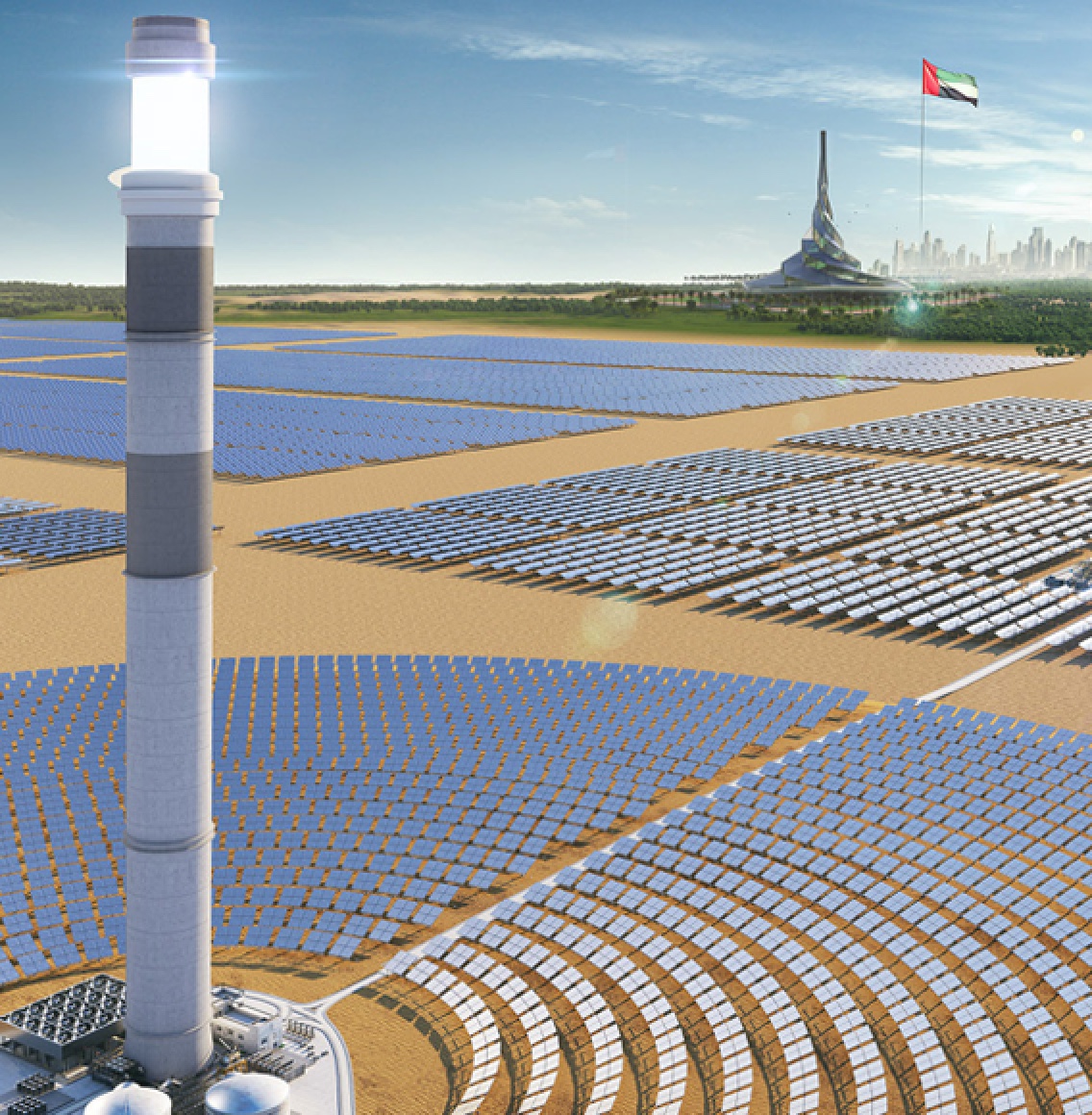 The fourth phase of the solar park is the largest single-site solar IPP project in the world that combines CSP and photovoltaic technology. The phase will use three technologies to produce 950 megawatts (MW) of clean energy at an investment of AED 15.78 billion. It will have a total capacity of 950MW, with 700MW from Concentrated Solar Power: 600MW from a parabolic basin complex and 100MW from a solar tower and 250MW from photovoltaic solar panels. The project will use 70,000 heliostats, and the longest global thermal storage capacity of 15 hours to allowing for energy availability round the clock. The CSP project will have the world’s tallest solar tower, at 260 metres. 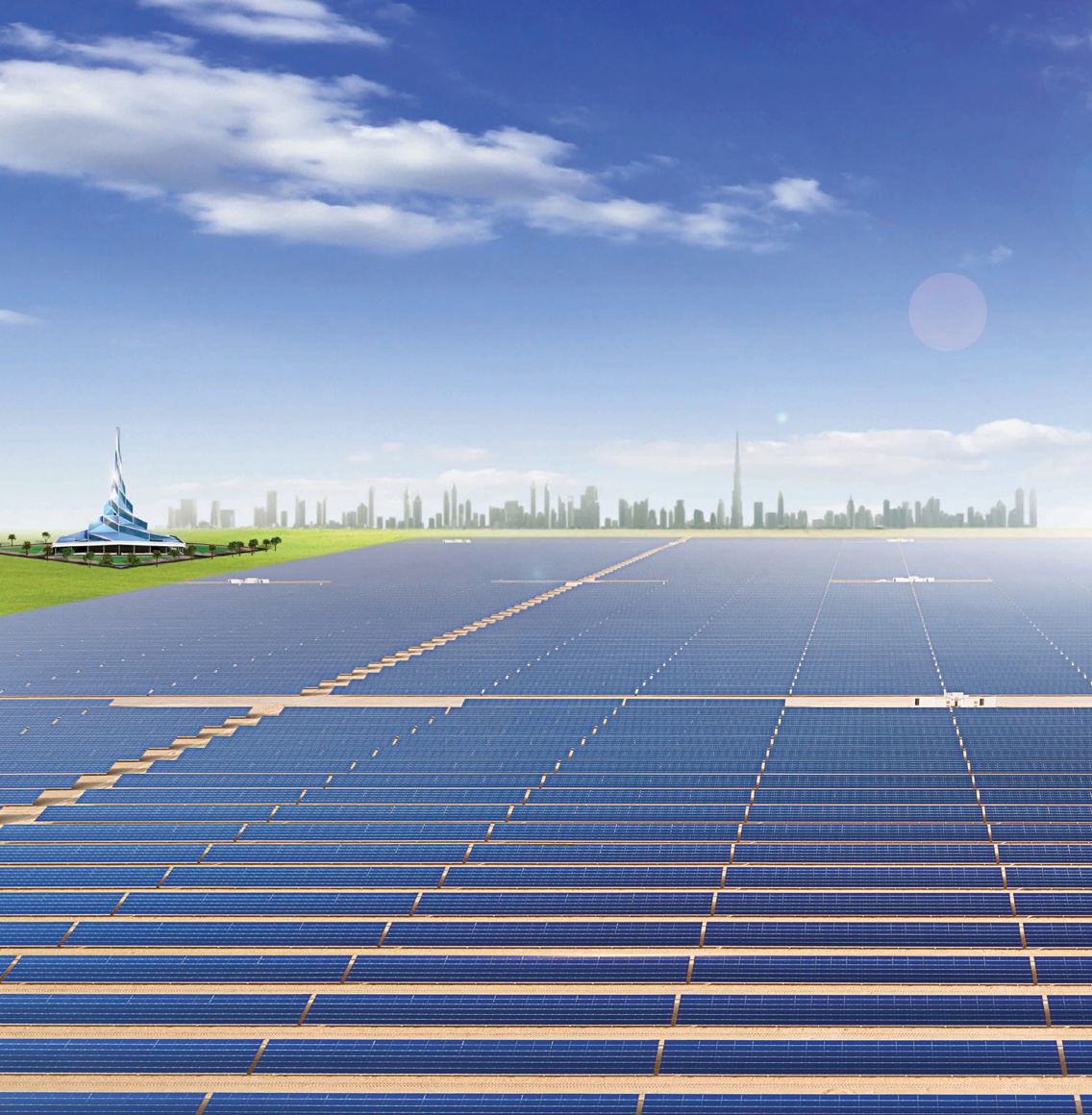 DEWA is implementing the 900MW 5th phase of the Mohammed bin Rashid Al Maktoum Solar Park using photovoltaic solar panels. Using the IPP model, DEWA achieved again another world record by receiving the lowest bid of USD 1.6953 cents per kilowatt hour (kW/h) for this phase through a partnership with the consortium led by ACWA Power and Gulf Investment Corporation. This phase will become operational in stages starting Q2 of 2021.